Being made holy in Him

Being made holy in Him

The eleventh Sermon of the Commentary upon the Gospel of Luke by the holy Cyril, archbishop of Alexandria, upon the manifestation of our lord. 3:21-23 46. And it came to pass, that when all the people were baptized, Jesus also was baptized: and as He was praying, the heavens were opened, and the Holy Ghost […] 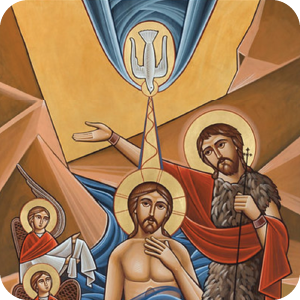 The eleventh Sermon of the Commentary upon the Gospel of Luke by the holy Cyril, archbishop of Alexandria, upon the manifestation of our lord.

3:21-23 46. And it came to pass, that when all the people were baptized, Jesus also was baptized: and as He was praying, the heavens were opened, and the Holy Ghost descended upon Him in bodily form like a dove. And there was a voice from heaven, saying, Thou art my beloved Son; in Thee I am well pleased. And Jesus Himself was beginning to be about thirty years old.

AGAIN come, that fixing our mind intently upon the Evangelic Scriptures, we may behold the beauty of the truth. Come let us direct the penetrating and accurate eyes of the mind unto the mystery of Christ; let us view with wonder the admirable skill of the divine economy: for so shall we see His glory. And thus to act is for our life: as He Himself assures us, when speaking unto God the Father in heaven, “Those things are life eternal: to know Thee Who alone art true; and Jesus Christ, Whom Thou hast sent.” How therefore was He sent? and what was the manner of His coming unto us? For being by nature God That filleth all, how, as the blessed John the Evangelist said, “was He in the world,” Himself being Lord? And how was He sent by the Father, when as God He is the Creator and Sustainer of all things? for all things were established by Him.

The wise John the Evangelist then teaches us, saying, “And the Word was made flesh.” But perchance some one will say, ‘What then? Having ceased to be the Word, did |44 He change into being flesh? Did He fall from His Majesty, having undergone a transformation unto something which previously He was not?’ Not so, we say. Far from it. For by nature He is unchangeable and immutable. In saying, therefore, that the Word became flesh, the Evangelist means a man like unto us. For we also are often called flesh ourselves. For it is written, “And all flesh shall see the salvation of God,” meaning thereby that every man shall see it. While therefore He immutably retains that “which He was, yet as having under this condition assumed our likeness, He is said to have been made flesh.

Behold Him, therefore, as a man, enduring with us the things that belong to man’s estate, and fulfilling all righteousness, for the plan of salvation’s sake. And this thou learnest from what the Evangelist says: “And it came to pass that when all the people were baptized, Jesus also was baptized, and prayed.” Was He too then in need of holy baptism? But what benefit could accrue to Him from it? The Only-begotten Word of God is Holy of the Holy: so the Seraphim name Him in their praises: so every where the law names Him: and the company of the holy prophets accords with the writings of Moses. What is it that we gain by holy baptism? Plainly the remission of our sins. But in Jesus there was nought of this; “for He did no sin: neither was guile found “in His mouth,” as the Scripture saith. “He was holy, harmless, undefiled, separate from sins, and made higher than the heavens,” according to the words of the divine Paul.

But yes! perchance some one will say, who has been ill instructed in the faith, ‘Was it then God the Word that was baptized? Was He in need of being made partaker of the Holy Ghost? Not at all. Therefore it is that we affirm, that the man who was of the seed of David, and united unto Him by conjunction 47, was baptized and received the Spirit.’ The |45 Indivisible therefore is divided by you into two sous: and because He was baptized when, thirty years old, He was made holy, as you say, by being baptized. Was He therefore not holy until He arrived at His thirtieth year? Who will assent to you, when thus you corrupt the right and blameless faith? For “there is one Lord Jesus Christ,” as it is written. But this we affirm: that He was not separate 48 from Him, and by Himself when baptized and made partaker of the Holy Ghost: for we know, both that He is God, and without stain, and Holy of the Holy: for we confess that “of His fulness have all we received.” For the Holy Spirit indeed proceedeth from God the Father, but belongeth also to the Son. It is even often called the Spirit of Christ, though proceeding from God the Father. And to this Paul will testify, saying, at one time, “They that are in the flesh cannot please God: but ye are not in the flesh, but in the spirit, if so be the Spirit of God dwelleth in you. But if any one have not the Spirit of Christ, he is none of His.” And again, “But because ye are sons, God hath sent the Spirit of His Son into your hearts, crying, Father, our Father.” The Holy Spirit therefore proceedeth indeed as I said from God the Father, but His Only-begotten Word, as being both by nature and verily Son, and resplendent with the Father’s dignities, ministereth It to the creation, and bestoweth It on those that are worthy. Yea verily He said, “All things that the Father hath are mine.”

But let us retort upon those who pervert the right belief this question; ‘How can He Who received the Spirit, if He be, according to your phrase, a man, and the Son separately and by Himself, baptize with the Holy Ghost, and Himself give the Holy Spirit to them who are baptized?’ For to be able to impart the Spirit to men suiteth not any one whatsoever of things created, but, together with God’s other attributes, is the distinct property of Almighty God alone. But He Who gave It was man: for the wise John said, “After me cometh a Man, Who was before me . . . He shall baptize you with the Holy Ghost and with fire.” As therefore it is unbefitting God the Word, |46 regarded as God the Word, to draw near unto holy baptism, and be made partaker of the Spirit, so in like manner it is altogether incredible, or rather impossible to believe that the ability to baptize men with the Holy Ghost, is the act of a mere man with nothing in Him superior to ourselves.

But how then, they object, was He baptized, and received also the Spirit? To which we reply, that He had no need of holy baptism, being wholly pure and spotless, and holy of the holy. Nor had He need of the Holy Ghost: for the Spirit That proceedeth from God the Father is of Him, and equal to Him in substance. We must now therefore at length hear what is the explanation of the economy. God in his love to man provided for us a way of salvation and of life. For believing in the Father, Son, and Holy Ghost, and making this confession before many witnesses, we wash away all the filth |47 of sin, and are enriched by the communication of the Holy Spirit, and made partakers of the divine nature, and gain the grace of adoption. It was necessary therefore that the Word of the Father, when He humbled Himself unto emptiness, and deigned to assume our likeness, should become for our sakes the pattern and way of every good work. For it follows, that He Who in every thing is first, must in this also set the example. In order therefore that we may learn both the power itself of holy baptism, and how much we gain by approaching so great a grace, He commences the work Himself; and, having been baptized, prays that you, my beloved, may learn that never-ceasing prayer is a thing most fitting for those who have once been counted worthy of holy baptism.

And the Evangelist says that the heavens were opened, as having long been closed. For Christ said, “Forthwith shall ye see the heavens opened, and the angels of God ascending and descending upon the Son of man.” For both the flock above and that below being now made one, and one chief Shepherd appointed for all, the heavens were opened, and man upon earth brought near to the holy angels. And the Spirit also again came down as at a second commencement of our race: and upon Christ first, Who received it not so much for His own sake as for ours: for by Him and in Him are we enriched with all things. Most suitably therefore to the economy of grace does He endure with us the things of man’s estate: for where otherwise shall we see Him emptied, Whose in His divine nature is the fulness? How became He poor as we are, if He were not conformed to our poverty? How did He empty Himself, if He refused to endure the measure of human littleness?

Having taken therefore Christ as our pattern, let us draw near to the grace of holy baptism, that so we may gain boldness to pray constantly, and lift up holy hands to God the Father, that He may open the heavens also unto us, and send down upon us too the Holy Ghost, to receive us as sons. For He spake unto Christ at the time of holy baptism, as though having by Him and in Him accepted man upon earth to the sonship, “This is My beloved Son, in Whom I am well pleased.” For He Who is the Son by nature and in truth, and the Only-begotten, when He became like unto us, is specially |48 declared to be the Son of God, not as receiving this for Himself:—-for He was and is, as I said, very Son:—-but that He might ratify the glory unto us. For He has been made our firstfruits, and firstborn, and second Adam: for which reason it is said, that “in Him all things have become new:” for having put oil the oldness that was in Adam, we have gained the newness that is in Christ: by Whom and with Whom, to God the Father, be glory and dominion with the Holy Ghost, for ever and ever, Amen. 50